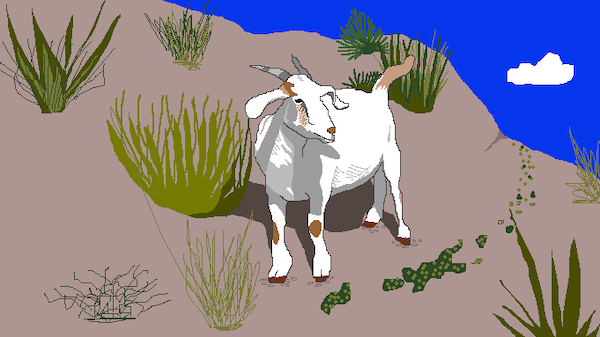 One of the babies; Art by Chris Thompson

The first time I led the herd out for a walk on my own last November, the goats listened to me for five or so minutes. That was about how long it took for them to get out of sight of the commons, at which point they veered away from the down-canyon road and charged up the hill. Earlier that day, my brother and I had easily taken this herd of 18 goats out for their morning walk, and it was chill enough that I believed I would be able to do it alone after the heat had broken that afternoon. I was wrong about this.

I was very wrong about this. The goats were clearly fed up with going to the same canyon everyday to comb the same juniper and manzanita bushes, and the opportunity afforded by the farm team sticking me—a freshly jobless blogger with limited goat-related work experience—on solo shepherd duties was not lost on the herd. My flailing attempts to redirect individual goats resulted in occasional stalemates at best, and I had to watch the other 17 goats calmly continue climbing each time I managed to stonewall any one particular goat. It was like trying to trap smoke with my bare hands. The goats wanted to eat fresh oak leaves, very much, and I was wholly unequipped to stop them.

My worst move was bullying a segment of the more agile goats down the precipitous wall leading into the correct canyon. The old goats simply did not feel like following, and were not interested in my counter-arguments. All I accomplished was splitting up the herd. I imagined coyotes, bears, and the other predators known to patrol the Los Padres National Forest laughing at me as they munched on warm goat organs, organs that I had imperiled through the sheer force of my incompetence.

When we all resigned from Deadspin last October, I was on the farm. My partner had been living on a remote farm in Southern California since September, and I planned to spend the odd weekend down there, maybe more. The busiest time in the sports calendar was coming up, though, and I knew there was only so much that I’d be able to do while off the grid and three miles from any road. The farm was an escape, never a place I saw myself as an active participant. I was the opposite of a goatherd. My place was online, at Deadspin. You know what happened next, and then I just had the farm.

The farm was a particularly strange place to hand in my resignation, since nobody else who lived out there had much context for what we’d done. At the Outline, Albert explained better than I can the alchemical vibe of working at Deadspin, and it was selfish and perhaps a bit pitiful of me to expect other people who were doing something as impressive as operating a harmonious little nonprofit and farm in one of the driest parts of the state to immediately grasp the full context of what walking away from this particular job meant to me. They were, of course, angelically sympathetic, and it was probably good for me not to have someone around who was steeped in the same inscrutable media beefs and grievances as I was. It helped me get over my shit quicker, but I didn’t know that’s what I needed at the time. The work of becoming drunk that night was rendered much trickier by the fact that the only two bars in a 40-mile radius closed before six, somehow.

So, with no full-time work to keep me sitting around in San Francisco away from my partner that winter, I began to split my time between the farm and the Bay Area. I took on various tasks at the farm, although I was immediately drawn to the goats, probably because I was a little scared of them. Gulliver, the team captain of the goats in my eyes and my eyes only, is the size of a small horse. Both Sociocracy and her kid seemed determined to put their horns into my butt. I didn’t know anything about animals. I had no skills.

Back up on the hill, with the herd split into two groups, I was unraveling. Chuck and Sierra, the pair of dogs assigned to live with the goats, were equipped to protect the goats, not herd them. The harder I yelled and cajoled the goats to go down to the damn valley floor, the harder they resisted. I could physically dislodge goats here and there by sort of hip-checking them if they weren’t too far into a given tree, but the scrabbly woods was their turf, not mine.

No animals besides me seemed concerned about the splitting of the herd, and after screaming at the goats and scraping my whole body on the underbrush, I more or less gave up. I would stay with the group of goats on the hill, and go back for the stray adventurers later. I composed an apology to the farm team and just sort of mutely stared at the goats. I swear it looked like they were laughing at how easy it had been to get one over on me.

Within 10 minutes, the stray goats caught up to us. They’d realized that the rest of the herd was not going to follow them down the cliff, and so they rejoined the group. The thing to know about these goats is that they are obstinate idiots, but the other thing to know is that they have an incredible and innate herd instinct. My mistake was not that I let the goats where they shouldn’t have gone so much as it was that I did not let them be goats.

The first half-dozen times I took the herd out, I would count them every 20 minutes, worrying that I’d lost one, or that one of the babies had hurt itself. Yet they were always bunched together, always following whichever goat appointed itself alpha that day. The trick was to figure out as quickly as possible which goat was going to be the leader on any given day, and adjust my herding style to counter them.

If it was Gulliver, that wasn’t as big a problem as it might seem, given his bulk. At heart, he’s not a wrestler, and he is perhaps the only goat big enough to give a human sufficient leverage to nudge him off a bush. Sociocracy lives to fight and scowl, but she can be cowed. Greta and her daughter Marzipan have even temperaments, and they don’t have the buccaneering instinct of, say, Teasel. If Honey is in charge, that’s a problem, since she’s dead set on crossing the north road and picking the south-facing slopes dry of their scant vegetation. Neither carrot nor stick works with her, and if she’s the alpha on a slow day, your only choice might be to grab her collar and start sprinting in the direction you need to move the herd. Gemma, Thistle, Uma, the babies, Bonnie, Vetch, and the others were content to follow orders.

Towards the end of my time going to the farm, they got into climbing the yucca-dappled hill behind their pen instead of going inside, and it would take over an hour to get them back. If I ever got frustrated enough to try and reason with them, or ask them nicely, they’d smirk at me and keep walking the wrong way, saying “Fuck you,” with their eyes. Some days they would be perfect. Other days they would test me by not walking out of the pen, or they’d decide to walk two miles down the road to check out a canyon they hadn’t spent time in since last year. I don’t really think they formed a connection with me. It was more that I bonded to them and they came to accept that I was one of the people they messed with. I never got sick of it.

Anyway, to answer the question posed at the top of this post: you don’t herd goats, they herd themselves.