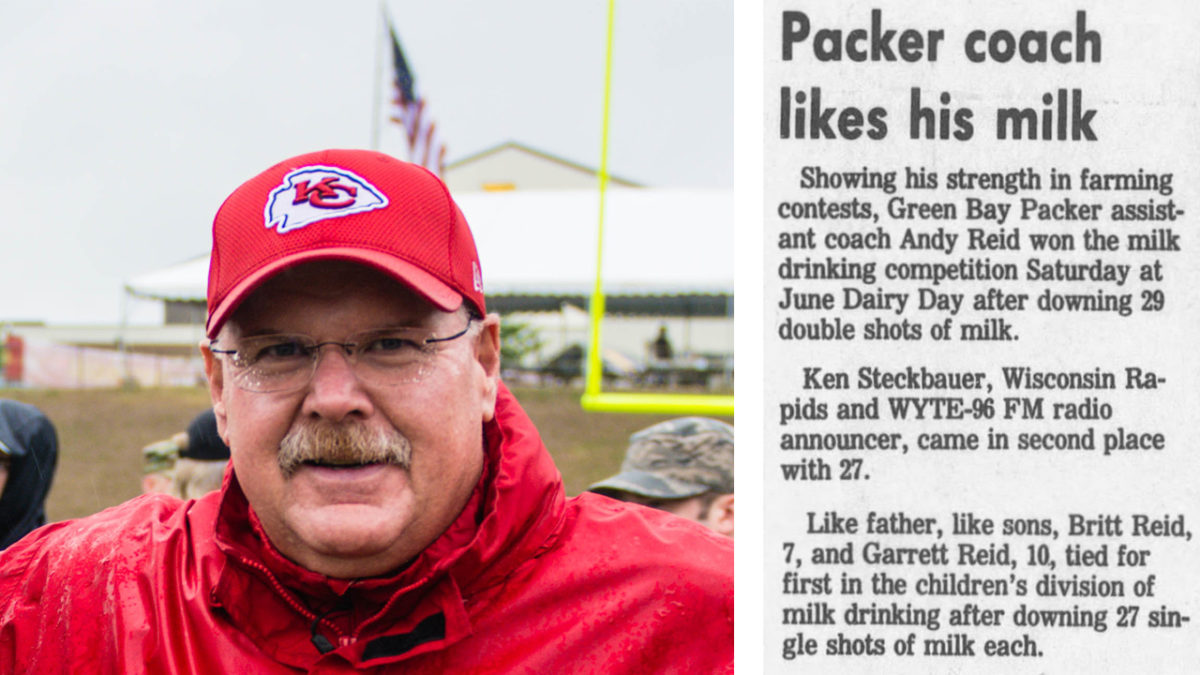 The first reference I could find in a newspaper regarding Andy Reid and food came on front page of the June 14, 1993 Stevens Point Journal. “Packer coach likes his milk,” the headline read. Two days earlier, Reid, then the Green Bay Packers’ offensive line coach, had defeated a local announcer and others in a milk-drinking contest. He’d downed 29 double-shots of milk. The report does not identify how quickly Reid, then 35, drank nearly a half-gallon of milk.

Reid has ascended in the NFL coaching ranks since his competitive milk-drinking days. He became QB coach of the Packers, then moved to the Eagles for 14 seasons of relative success (and one Super Bowl loss). Now he’s back in the Super Bowl with the Chiefs in his seventh season in Kansas City.

The food stories have not stopped. It makes sense: Reid’s most notable physical trait is that he’s a fat guy (second place: his mustache). Sportswriters love to write about notable physical traits, food, fat guys, fat guys eating food, and fat guys with mustaches eating food. Fortunately, sportswriters are much nicer toward fat people than, say, J.K. Rowling writing about the Dursleys. Reid plays into it, too, bringing up food with regularity in his interviews.

He invites the coverage, honestly. “The only time he ever liked a question of mine was when he had an opportunity to say ‘fat guy,’” says Jimmy Kempski, a longtime Eagles beat writer who covered the team as a freelance reporter during the Reid era and now writes for Philly Voice. During an injury-plagued stretch, Kempski had asked Reid about which player would fill in on the offensive line if the team were down to four linemen.

“In the postgame presser, I asked him who they would have put in there if that happened,” Kempski says. “He perked up, and said that he was on the sideline ‘looking for fat guys,’ or something like that. He didn’t even answer the question. He was just excited to make a fat guy joke. I didn’t get an answer until I asked in the locker room.” (For Eagles completists, it would’ve been defensive tackle Cullen Jenkins.)

Reid had a food zinger just this week. Talking during a press conference, Reid compared his nine grandchildren to foodstuffs: “They keep you young. And at the same time they make you feel old. It’s kind of like sweet and sour pork.”

Sports are full of analogies that don’t actually mean anything, and this one fits. “He leans in to the fat guy stuff so much that he often doesn’t make any sense … he said that his grandkids keep him young, but make him feel old, and he somehow likened that to sweet and sour pork,” Kempski says. “That doesn’t make any sense, but sports reporters eat that shit up with a spoon.”

Another Reid story making the rounds this week came from Bo Wulf’s interviews with Eagles players about Reid at The Athletic (subscription required). Jeffrey Lurie, the Eagles owner who hired Lurie in 1999, was asked his favorite Reid story:

“I have so many, but I’ll give you an early one, a really early one,” Lurie said. “It’s the first, second time I think, I ever went out to dinner with Andy. So we order and, you know, go around the table and everyone orders their dish. But Andy asks for three. Three! It wasn’t one. It was like, ‘I’ll have one steak,’ or whatever it is. He asked for three. And it was like normal. So it was sort of like, ‘OK!’”

This is a great story. Lurie has told it before. In 2017 Reid told Adam Schefter he doesn’t remember the story the way Lurie tells it. “Well, I might have,” Reid said. “It might have been for Joe, Jeffrey, and Andy. Other than that, I don’t remember ordering three steaks. I’ll take credit for it though.” An regional VP of a steakhouse told WIP-AM that Reid ate about 90 percent of a ribeye, a New York strip, or a filet mignon—about 50 ounces of steak.

Andy Reid and food go way back. He has a favorite macaroni and cheese dish that uses an absurd number of cheeses. (Here’s how to make it.) His eats junk food after losses and his bitmoji includes pancakes. Once asked how the offseason went, he replied: “I attacked a couple chile rellenos.” He kept talking about cheeseburgers and Snickers bars at a Chiefs off-season press availability. He appeared on Diners, Drive-Ins and Dives.

Amazingly, Reid was also once a spokesperson for a diet company, pitching for a company called L.A. Weight Loss after losing weight on their program in the early 2000s. He later gained it back, then lost 75 pounds on a different diet plan. A few years ago, he said he lost 60 pounds.

No matter what’s going on, Andy Reid and food is always a story. Just think of the tales of the feast he’ll have if Kansas City wins the Super Bowl.

Uncut Gems Is The First Great Movie About Watching Sports