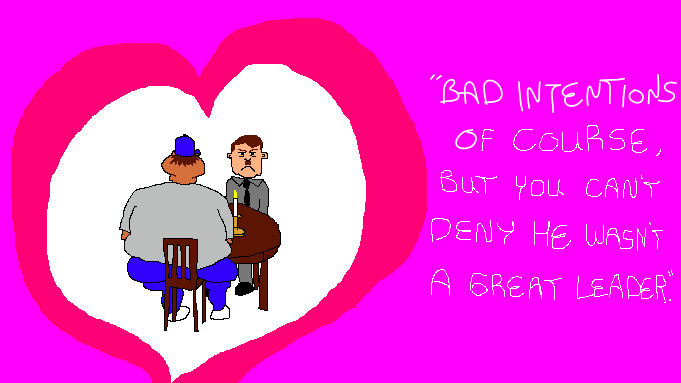 KV: So you graduated from Drury with a degree in History, you’re a history guy. If you could have dinner with three historical figures, living or dead, who would they be? And I’m ruling out football figures.

MB: This is probably not going to get a good review, but I’m going to say Adolf Hitler. It was obviously very sad and he had bad motives, but the way he was able to lead was second-to-none. How he rallied a group and a following, I want to know how he did that. Bad intentions of course, but you can’t deny he wasn’t a great leader.

You would expect a history major to have at their disposal a rich catalogue of doers of imperialism, and to be able to come up with several examples who did not also do genocide via formal extermination. History is in fact overfull with megalomaniacs who reshaped borders and brought millions under their rule! A fool, so inclined, could reach blindly into a grab bag of history’s towering shitheads and come up with heaping handfuls of guys whose conquests required the marshaling of millions of loyal followers, who also did not do the Holocaust. You have to actually try to get Hitler in order to come up with Hitler.

Berger released a statement on Twitter, apologizing for his answer and describing his desire to have dinner with actual Hitler as “a poor effort to give an outside-the-box answer to a question.” But the damage had already been done, and Grand Valley State announced Thursday that Berger and university administrators had reached a mutual agreement to part ways.

For what it’s worth, Berger’s other two answers were John F. Kennedy and Christopher Columbus, so we can be sure he has at least leafed through a third-grade history textbook.

Here Is Our Sponsor Dashlane’s Big Game Commercial, Which Is Being Posted Here As Sponsored Content