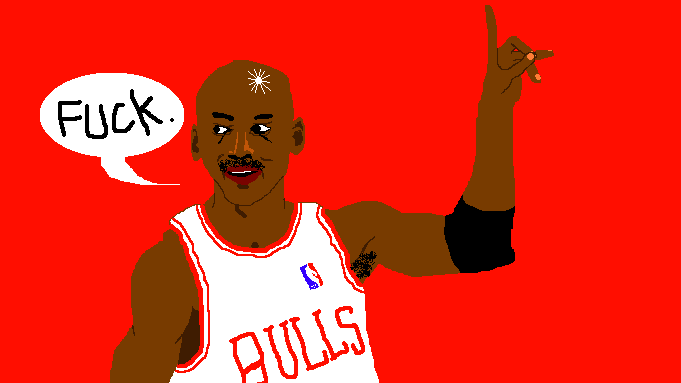 When times are hardest, even the Disney Corporation signs off on the F-bomb. I mean, sure, lots of other unprecedented things happen these days, but this is network TV’s whopper with cheese.

Of ESPN’s wall of promotion for The Last Dance, the cult-tastic 10-hour act of fealty to Michael Jordan, one of the least discussed is their two-tiered profanity package—ESPN is showing the full pungent dialogues, while ESPN2 is de-F’ing the show for more sensitive ears.

It’s à la carte programming for the Covid Era, which means that one more brick in the crumbling broadcast wall has come crashing to the empty street below. And weirdest of all, it’s the family-est network of them all, an empire built on the 60-year-old midwestern sensibilities of The Walt Himself, that has decided that the most versatile word in the English language can finally join the rest of the television dictionary.

Scottie Pippen dropped one to defend his best/worst summer. Jordan dropped one to Ron Harper. There were a couple of others, though sadly Jordan didn’t say, “This is one quality F-ing glass of alcohol.” Maybe he’ll drop that in a later installment.

For most of you, this is not a big deal at all, because the Word of The Day is in such common parlance now across all media. It is even used as an adverb by the most grammatically adventurous, and it is surely the most utilitarian of punctuation marks for two full generations of colloquial doodymouths. (At least, doodymouths by the oldest and most priggish among us. People who know that language is in fact a living, breathing thing that should reflect the times, even these thoroughly fucked times, long ago got over this particular landmine.)

But network television is still jumpy about the word and its six Carlinian compatriots, so Disney’s acknowledgement that the word needed to be honored by being left free and feral in their latest book of the ESPN bible actually is a big deal—at least if you remember what Disney is. Or at least was, until they needed Michael Jordan to save their asses, spring ratings-wise.

Disney built its empire on being crushingly family-friendly. Even their animated villains had a sneer that looked almost like a smile. Bad words didn’t exist, and definitely not that one. I mean, it isn’t even the most offensive one (and I should know because I use all but one of them) but it has been traditionally treated like it.

Even if this isn’t the first time the wall has been breached on the Disney dime (Update: A Season On The Brink in 2002, a fictionalized version of John Feinstein’s book on Bob Knight, did it first), this is a stark acknowledgement by the company that not only does the word exist but that it is necessary to the story, because the story is so necessary to it. Athletes use the bomb even more than your regular citizen because their workplace doesn’t have rules on lingual deportment, which means that there is no reason for them not to revel in its viscous utility in every sentence in which it fits, and some in which it doesn’t. Jordan gets mad, so it comes out. Pippen thinks he is getting screwed by Jerry Reinsdorf so it comes out. This is their language of choice, and even after you make your peace with the fact that this is Jordan telling the story of himself, it gives the marathon a slightly roughened patina that even faux-realism demands.

Like everything else in this desiccated sports world that isn’t the Belarusian Premier League (yeah, how ’bout that quick start to the season from Slutsk?), ESPN needs programming, and Peyton’s Place marathons weren’t belling the cat. They even jumped The Last Dance in line from summer to Sunday because the beast must be constantly fed, so the show had a level of leverage that The Jump doesn’t. And if it was coming with the full Jordanian vocabulary, well, as any Executive Vice President in Charge of Avoiding Being Furloughed will tell you, there’s one thing worse than using the F-word and that’s being financially F’d.

So while you probably won’t be terribly troubled by this, and even have a channel where your more virginal sensibilities won’t be outraged, this is still an enormous step for Disney. In that way, this might be the company’s first dance in a brave new world that everyone else has already discovered. We’ll know come Thursday if Rece Davis opens his show with a cheery, “Hello, everyone and welcome to the next 20 pathetic hours of your empty lives, or as we call it, the fucking NFL Draft.”

See? It’s so much the perfect word for so many situations, more now than ever, that nothing else will really do. Even Disney knows that now.

Ray Ratto has always been a bit of an F-wit, but he blames bad parenting for that.