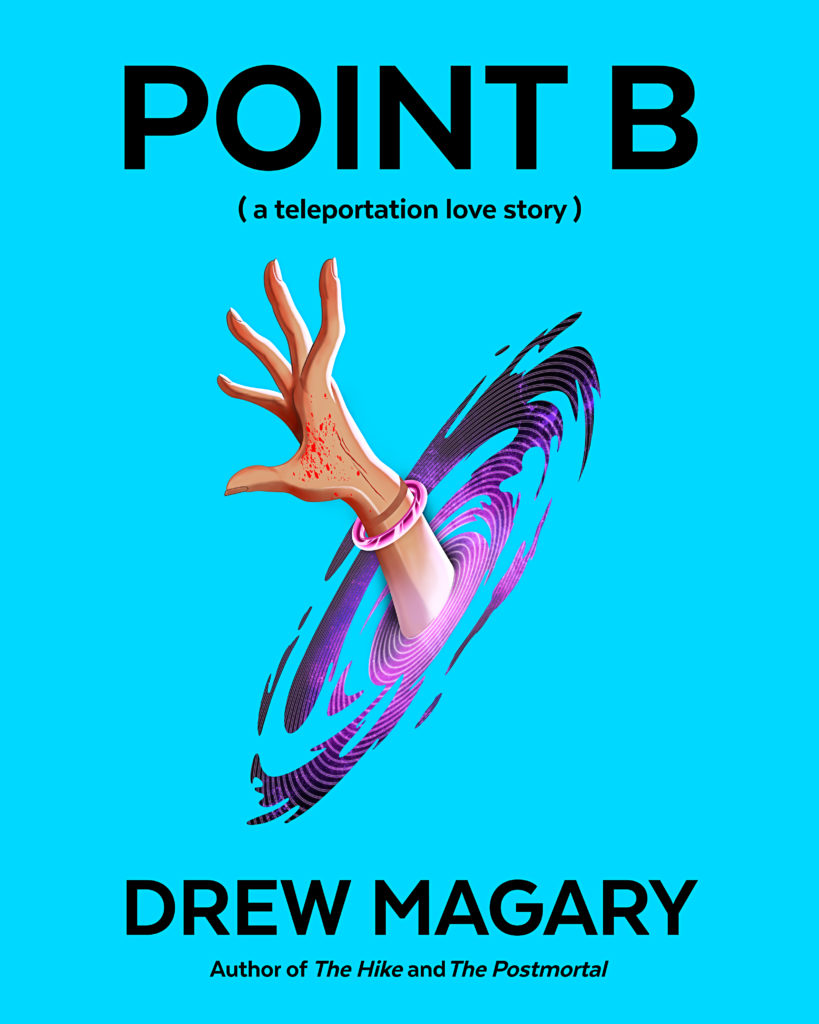 This is Point B. It’s a teleportation love story and you can buy it starting today. As it stands presently, you can only get Point B as an eBook from the dreaded Amazon, but the paperback edition should be available there shortly, perhaps by the end of the week. Should you dare to violate social distancing with packaged materials (my wife and I have a whole system for dealing with such contraband), you will indeed be able to soon get a hard copy of this bad boy and then tell me that there’s a typo in it.

There will not be a book tour, because A) We’re all buried alive at home, and B) I’m self-publishing Point B because I am a MAVERICK. I wasn’t gonna let BIG BOOK hold me down, so I have to sell this book through Jeff Bezos’s shit-eating behemoth instead. I can taste the ethics (I’m working on having alternate sales outlets available for you; until then, the Death Star is my only option, though Amazon does make it so you can lend eBooks to people once you’ve bought them). In 2009, I didn’t have a full-time job and so I wrote a novel on spec as a self-investment. That spec novel became The Postmortal. And now here I am, over a decade later, again without full-time work and making the same gamble. In a dying economy. GOTTA LOVE MY ODDS.

To that end, I invite you to a live reading of Point B on YouTube, tonight at 8:00 p.m. EDT. Just click on this link, YouTubers. I’ll read an excerpt from the novel and then answer your questions about it, or about anything else on your mind. Please show up drunk. I will not be drunk myself, but I won’t be sober either.

Okay, now that we’ve got business out of the way, lemme tell you about Point B, which has been eight years in the making. I’ve been living inside this story for a very long time, to the point where I’m simultaneously ecstatic and heartbroken to let it go. Every novelist acts like writing a novel is fucking torture. That has not been my experience with these things. Lemme tell you what writing a novel can be like instead…

(does a yard-long rail of cocaine)

I remember reading a critic bitch about how the book he was reading (not mine) was written with the movie already in mind. And my response to that critic was like, well yeah, no shit. In the right hands, a book IS a movie, man. It’s theater of the mind. And I, the author, get to be the filmmaker. When I get on a run, it’s like I’m watching the movie unfold in real time AS I’m writing the fucker. I’m in the movie. I get to act every character’s part. I get to be the director and tell those characters to jump off of cliffs, kiss the girl, or teleport to fucking Singapore.

I get to be the editor and cut out all the boring shit, in accordance with Elmore Leonard’s immutable law of storytelling. (Don’t worry, I did have friends take a look at the book and give me critical feedback. I have a terrifyingly large ego but that doesn’t mean I always obey it.) That said, having total control over this process isn’t without its charms. I get to be my own writer’s room. I get to be the special effects team. I get to be a demanding fanboy who obnoxiously points out plot holes that the filmmakers then have to rush to fix. RIP my butthole cut of the manuscript.

I get to screen the dailies over and over again in my mind and then reshoot and re-cut until I have the exact story I wanna see up on the silver mindscreen. If I say to myself, “Hey, it would be cool if a great white shark appeared in this part,” PRESTO! A few urgent keystrokes and there our shark is, leaping out of the water and ready to feed. I want a book to be so fast and alive that you don’t feel like it’s a goddamn novel. That’s why this story includes the following things:

Now you get to read Point B and see all of these things in YOUR mind. If you hate the book, that’s fine and I’ll say it’s fine even though I’ll mutter YOU FUCKING ASSHOLE under my breath immediately thereafter. Really though, I’m just glad this story gets to live. I’m glad you’re finally gonna be able to meet Anna Huff, J. Paul Bamert, Jamie Burton, Asmi Naru, and the elusive Lara Kirsch. These are real people to me, and I love them well past sanity.

Someone on Twitter asked me if this book was dystopian, because reading a dystopian book right now would feel AWFULLY redundant. So let me reassure you that while this book has a lot of unnerving shit in it—particularly right out of the gate—it also takes place in a world that is decidedly more pleasant than the real deal. You get to go outside in this world! That’s nice. You also get to whip out your phone and port to Mexico, South Africa, England, Ho Chi Mihn City, Cairo, the Outer Banks, Australia, and New Hampshire. That’s right: THE New Hampshire. Wow. Amazing.

I have no foolproof way to convince you to buy this book. I do not possess the salesman jiu jitsu of certain bestselling authors, nor do I have any physical retail infrastructure at my disposal this time around. I can tell you that if you liked the social sci-fi of The Postmortal and you also liked the breakneck pacing of The Hike, then this is the book for you. But you can smell the elevator pitch when you read that copy now, can’t you? All I can tell you is that I love this book. At night, after all the stresses of the day have ground me down to a nub, I treat myself by getting unreasonably stoned and spending some quality time with Anna, Bamert, Burton, Asmi, and Lara. I don’t physically write. I just go somewhere else in my headspace and hang out there for a while. Sometimes I open up the photo album on my phone, looking for photos from the story that don’t exist. I’ll let this old profile of Joyce Carol Oates describe the sensation:

She claims to daydream about her narratives constantly, while jogging, while cooking, while gazing out her office window. And she has said she finds sleeping and eating unwelcome distractions from the ”enraptured conversation” in her head.

Yup. That sounds about right. Also, given that Point B is, at its core, a teenage love story, I got to be 17 years old again. I got to remember how monumental everything felt to me back then. You get older and more jaded and that sense of epic-ness tends to diminish. For this book, I reclaimed it for just a little bit. It was a nice feeling, given that I died of a brain hemorrhage right before my first draft of Point B was finished. This is, in a way, my first posthumous work. It sure as shit won’t be my last. Great books take you places. That’s the standard message of every “Reading is FUNdamental!” PSA you’ve ever been subjected to. With that in mind, I wrote a book that takes you every goddamn place I could think of. So come with me, won’t you? Join me and Anna and Lara and Bamert and let’s all get the fuck out of here together. See you at the reading tonight.

Unnamed Temporary Sports Blog Up All Night: Everyone Needs A Little Numb, Once In A While