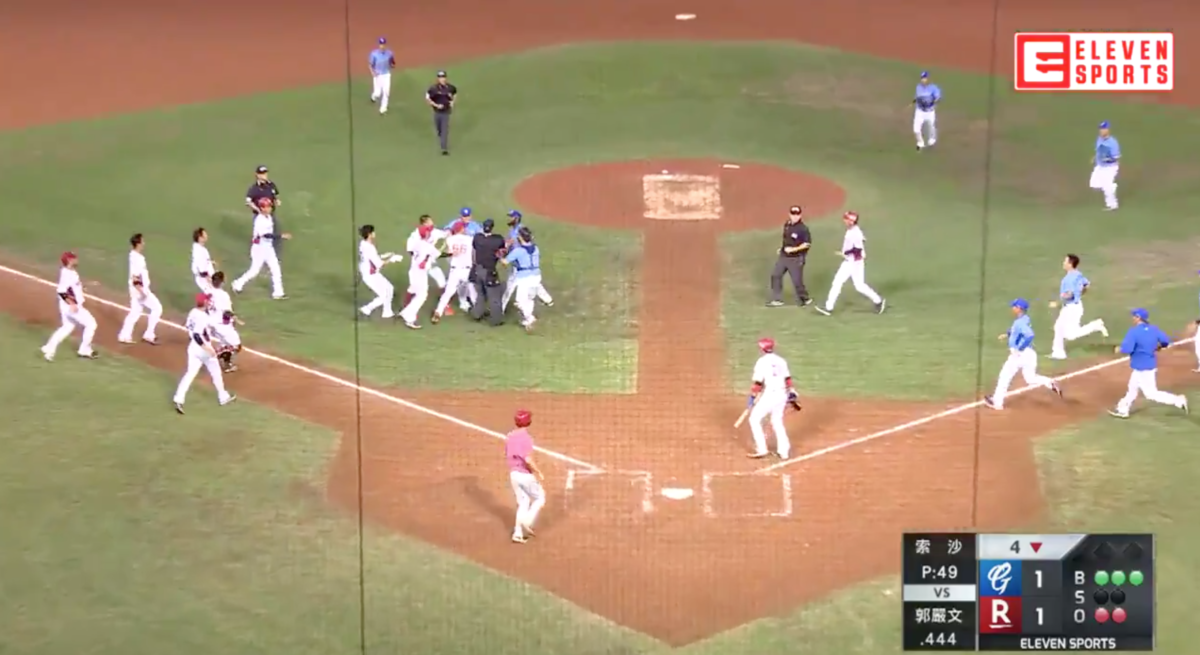 This, my friends, is a sight for sore eyes:

Yes, that’s a bench-clearing brawl in Taiwan’s CPBL, after Fubon Guardians pitcher Henry Sosa (whom you might [not] remember from a cup of coffee with the Astros in 2011) plunked Rakuten Monkeys second baseman Kuo Yen-Wen. Here’s the full video of it. Even more importantly, that’s baseball. Actual, professional, competitive baseball, being played on Earth right now, even as you shelter in place in your boring home with your miserable family. There is a light at the end of the tunnel, and this is what it looks like.

It’s not ideal. The CPBL isn’t exactly the cream of the crop, playing at about a Double-A level. Most of the games aren’t broadcast in English. And large gatherings are still banned, as the coronavirus still lurks, so fans are not allowed into the stadiums. (When the CPBL regular season began last week, the games were watched live only by mannequins, cardboard-cutout fans, and drum-playing robots.) But again, it’s still baseball. And considering that right now I’m so starved for baseball that I’d even watch a Colorado Rockies game, this has to be good enough.

Here’s the season’s first walk-off, from last Wednesday. Still exciting, without a crowd and without any emotional investment in the teams and players? You betcha!

If you’d like to try getting into the CPBL, or if you just want it as reassuring background noise when you wake up—weekday games start at 6:30 a.m. Eastern—here’s a quick introduction to the league, and here’s information and links for streaming the games. For now, only Monkeys games offer English-language commentary, but the league is aware there’s interest over here, so don’t be surprised if that’s expanded.

There will soon be even more options. South Korea’s KBO has just gotten the green light to go ahead with its season, as on Sunday the prime minister announced that pro sports would be allowed to go ahead without fans. An official announcement from the league is coming Tuesday, but expect a full 144-game schedule to be played, making up for the delayed start with double-headers and playoffs that run into November. A short preseason is expected to be followed by an opening day as soon as May 1.

Like the CPBL, the KBO will begin with empty stadiums, but have not ruled out allowing fans in later in the season, depending on the status of the Covid-19 outbreak in their respective countries.

It is achingly tempting to try to extrapolate the re-opening process in Taiwanese and Korean baseball to our own shores, and indeed, when MLB does finally return, this is how it’ll likely happen: compressed schedules and empty stadiums. But the U.S. is not Taiwan, which has had only six total Covid deaths, and it’s not Korea, which reported just eight new Covid cases on Sunday. The nations’ dramatically different coronavirus situations make it a fool’s errand to even start thinking about baseball yet.

Still, there are things to be learned. MLB’s previously floated “bubble” plan, which would stage the entire season in Arizona and keep players as quarantined from possible, would fall apart the second a single player contracted the virus. If the CPBL and KBO manage to keep their players healthy, it could encourage MLB to keep exploring the bubble idea.

A more realistic canary in the Covid mine is Japan’s NPB, which this weekend pushed back its own opening day indefinitely, and at least until June. Japan has been harder-hit by the pandemic than Taiwan or Korea, though nowhere near as hard as the United States. Baseball here can’t (or at least shouldn’t) consider starting until their Japanese counterparts have given it a go. That appears to still be some time off.

So, the upshot is that MLB isn’t coming back anytime soon, which really stinks, but also that baseball isn’t just MLB. And baseball’s already happening, once you know to look for it. That’s not nothing.

The Unnamed Temporary Sports Blog, Which Remains Unnamed And Temporary, Is Back