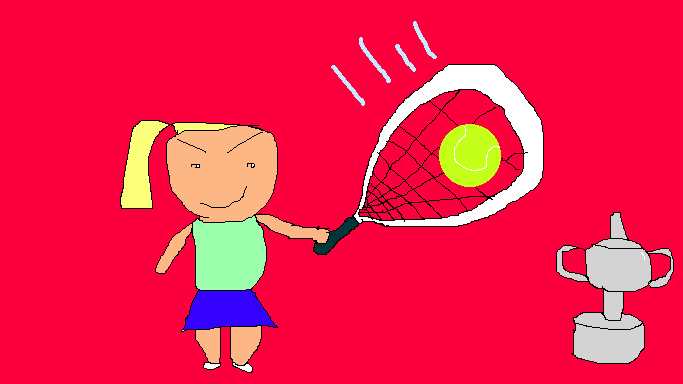 The best thing about Sofia Kenin, who won the Australian Open today, is that you cannot tell whether she’s madder after losing a point or winning it. Down-the-line winner after a long quad-pulverizing rally? Keels over the racket and howls like she’s mad at it. Holds serve with a first major title in sight? Pops the unused ball out of her pocket and whips it over her shoulder 10 feet in the air like she’s mad at it. Thumps an untouchable return with title just points away? Hop-skips and kicks the baseline hard like she’s mad at it. This is a potent, chaotic energy and tennis needs it badly. Please join me in warmly welcoming this new Sith apprentice into the sport’s deep roster of weirdos.

Why haven’t you heard of this 21-year-old American who just beat the No. 1 seed Ashleigh Barty in the semifinal and a resurgent two-time major winner Garbiñe Muguruza in the final? Not sure. Despite coming in as the No. 14 seed, she’s been off the radar of a typically quick-to-swoon U.S. media. But she clearly had a good publicist as a kid—a little South Florida prodigy by way of Moscow—based on the clips that have resurfaced in recent days. She had only made it to about the height of the net post when she developed a confident game plan for returning Andy Roddick’s serve: “If I split [step], and then I turn around, and hit my forehand with my short swing.” Sheesh.

Kenin grew to 5-foot-7, developed a mean counterpunching game that compensated for lack of power, then cracked the top 50 by 2018 and the top 20 by 2019. That season saw five wins over top-10 players: Barty, Elina Svitolina twice, then-No. 1 Naomi Osaka, Serena Williams at the French Open. At this Australian Open, Kenin didn’t have to play a seeded player through the first five rounds, but this body of work, along with her ambient rage, led me to suspect she’d be a tough out in the last two stages. Kenin undid home favorite Barty in an awkward, nervy match played in punishing heat.

In today’s final, she split sets with Muguruza, then fell to 2-2, 0-40 down in the third. In a major final, three break points might well be the point of no return. Muguruza had taken a timeout to get her back looked at after the second, but was a point away from just holding serve to pick up her biggest title in over two years. Kenin didn’t fold, though. She saved all three break points, then won the game, in outrageous fashion: five straight winners. She would later call these the “best shots of her life.” You could also call them Force lightning.

Either way I encourage you to watch this stretch in its entirety (it’s not all in that clip)—three down-the-line winners, ace, hacky slice forehands followed by a passing shot—because it’s one of the craziest feats of sustained focus you will see on a court, executed with so much at stake.

Kenin didn’t lose a single game for the rest of the night. Muguruza’s serve later short-circuited and she lost the title on a double fault. An anticlimactic ending, but after it sailed long, with her toil finally complete, Kenin let go anger and let loose a smile.

Skip Bayless Took His Talents And Muscles To South Beach; Left His Pubes At Home