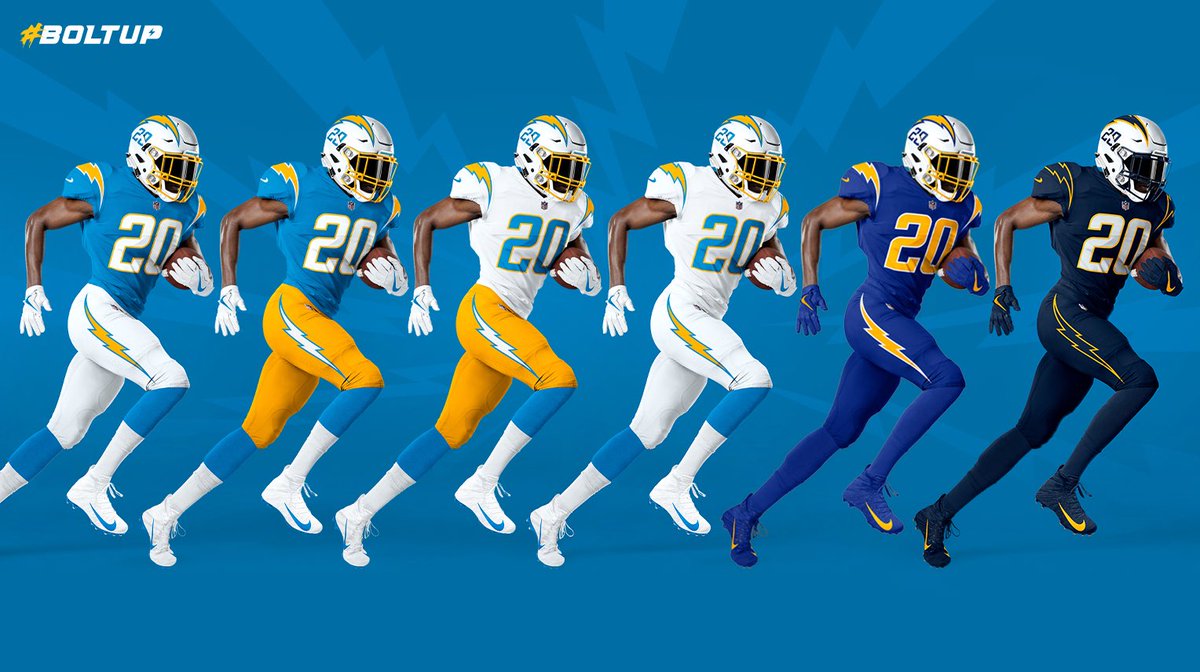 Courtesy of the Chargers

We’re still pretending there’s gonna be an NFL season, which means that there’s still gonna be a draft this week and that teams such as the Chargers, Browns, and Bucs are all unveiling “new” uniforms to get fans creaming their jeans for the season ahead. It’s a new team. A new start. A new ERA.

So let’s take a look at these sartorial revolutions, shall we? Here are the “new” Chargers unis, complete with the requisite Schefty flame emoji boost:

They have yellow pants now. I guess that’s neat. Next up, the Browns:

YOU BETTER BELIEVE I AM ABOUT TO BROCK, MOTHERFUCKERS. I saw fans complaining in the replies here that the Browns will no longer be wearing ORANGE pants. But really, if that’s your biggest complaint about the Browns, you aren’t following them all that closely.

Finally, we come to the Bucs. It’s important that all of these reveal videos are produced with all the expense and technique of a trailer for a new Disney Plus show:

It’s very easy to show people the future when the last iteration of your unis featured numerals from a 1985 Casio alarm clock.

These are not new uniforms. They’re the same goddamn uniforms these teams have been wearing for years now. The only reason they’re “new” is because they feature new piping around the nameplate or some other minimal tweak that’s considered revolutionary by the NFL’s idiotic uniform guidelines. They’re a software update you don’t even notice. But they do teams the favor of rendering older merch slightly obsolete, thus compelling Fred from Parma to use his stimulus check on the absolute latest fit. That way, he can look like Odell Beckham TODAY, right before he gets traded to Rams for a fourth-round pick.

No one would give a shit about these updates if it weren’t for the Schefters of the world doing their usually knob-slobbing and tweeting out the news like they just heard Patrick Mahomes got traded. But that’s how the NFL media system works now. Any time a team farts out a new pair of fucking socks, they can rely on a professional ferret like Schefter to not only broadcast the news to the world, but to do deliver it like it’s the announcement of a newborn child. Fuck these stupid old unis, fuck Schefter, and triple fuck the Chargers, Bucs, and Browns.