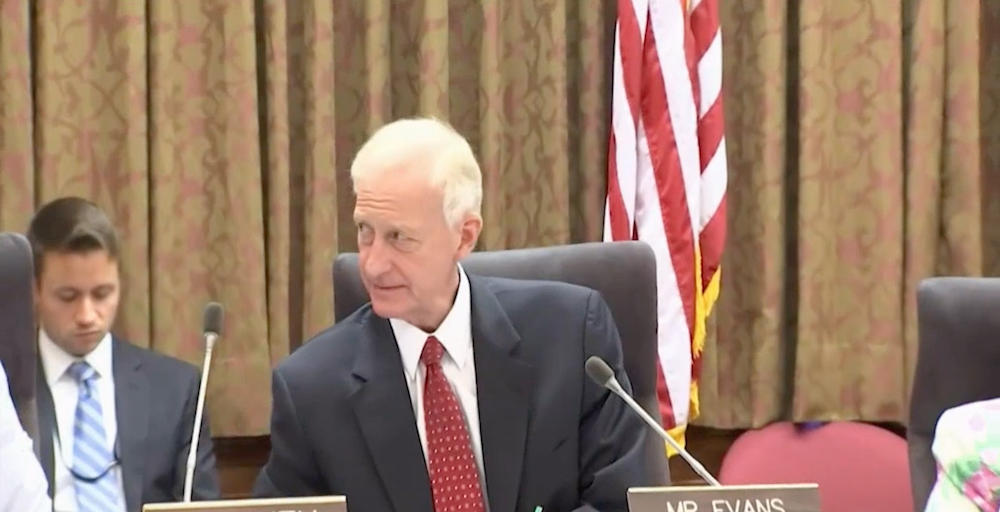 The bar has been high for local politicians in D.C. to attract national attention for their shenanigans ever since the reign of Mayor Marion “Bitch Set Me Up!” Barry. But dang if former-for-now city councilmember Jack Evans didn’t Fosbury Flop right over it this week. Evans, zealous comforter of the comfortable since his 1991 election and self-appointed consigliere to the market’s billionaire sports owners, began his campaign for a city council seat just 10 days after being drummed out of that very job for nearly a dozen ethics violations (that we know of).

Evans, who until his deposal was Dan Snyder’s point man in the effort to get a new football stadium built in the Nation’s Capital, has been a punching bag at home and nationally in the year-and-a-half since his corrupt ways were exposed. The beginning of the end for Evans came when the Washington Post found indisputable evidence that Evans had recruited clients for his law and consulting firms by bragging that he’d use his political clout to help their businesses. The Post reported that Evans was gifted a massive amount of stock from a Digi Outdoor Media, a digital sign firm, and procured a paid internship for his son with the same company, just before he lobbied the council to pass legislation that would allow that client to disregard permitting regulations. Evans also advocated for the merger of electric companies serving the city while his law firm was working behind the scenes to get the deal between the utilities done. As a scoundrel would.

Ethics investigators subsequently determined that Evans’ pay-to-play scheme brought him at least $400,000 from clients who he advocated for politically without disclosing his conflicts.

When Mayor Muriel Bowser went to Capitol Hill this fall to ask yet again for statehood for the federal city, Republican members of Congress cited Evans as proof that D.C. was too corrupt to allow its citizens federal representation. Embarrassed fellow councilmembers stripped him of a committee chairmanship and unanimously recommended that Evans be expelled from the council, and he lost his prestigious chairmanship of the board of Metro. Yet he still stayed in office until the council was on the verge of a vote that would make him the first councilman ever expelled. In his letter of resignation, which took effect January 17, 2020, Evans apologized for nothing and made no mention of his being a wretch.

And now he’s coming right back, like Bobby Ewing just stepped out of the shower and all the yucky stuff from the past never happened. Evans kicked off what promises to be an amazing campaign by filing paperwork to get on the ballot with the D.C. Board of Elections. Evans’ immediate return to politics after his humiliating exit became a national story, and had locals laughing with incredulity. “Tremendous chutzpah,” one constituent told the Post.

Yet Evans isn’t the first D.C. pol to refuse to just go away after being exposed as a grifter or cad. The aforementioned Marion Barry, after getting caught smoking crack on tape in an overreaching FBI sting operation and taking a break from the mayoralty to serve a 1990 prison sentence for drug possession, was elected to the city council in 1992, then the electorate gave him his job as mayor back in 1994. And Vince Gray, who was among the councilmembers condemning Evans, is a former mayor who himself refused to heed pleas to resign after the local U.S. Attorney’s office sent three of his campaign officials to jail and began focusing a corruption investigation on him. Gray got shellacked when he ran for re-election with the investigation still hanging over him. But after sitting out just one year, Gray ran for and won a council seat in 2016.

Also, notwithstanding all the bad ink, Evans should still have some powerful and monied friends around town. He’d enhanced his bona fides as a maker of sneaky deals that benefited them until the end. Evans spent last summer, for example, engineering a sneaky deal that gave the Maret School, a private K-12 school with $40,000 a year tuition, exclusive use of all the playing fields at the public Jelleff Recreation Center on weekday afternoons, forcing all public school kids in the popular rec center’s aftercare program to, among other indignities, play kickball indoors on even the sunniest of days. Evans’ son went to Maret–the same son who got the paid internship at the sign company Dad took money from and lobbied for and got the resignation ball rolling in the first place.

And D.C.’s been particularly generous to billionaire team owners during Evans’ reign on the council. Evans was a leader in the effort to provide the $1 billion in public funds used to build Nationals Park for the Washington Nationals, owned by the Lerners, once called the richest family in all of sports.The city gave Ted Leonsis land and a reported $50 million (out of a projected total cost of $55 million) for a Washington Wizards practice facility and home court for the Washington Mystics, both owned by Ted Leonsis. Taxpayers, not Leonsis, were responsible for all cost overruns when the practice facility came in more than $10 million over budget. The city also donated the land and at least $150 million needed to give MLS’s DC United their new soccer-specific stadium. Evans also took the lead in getting Snyder a stadium at the prized site where RFK Stadium now sits and the NFL team had its greatest glories. I was at a function in late 2018 where Evans boasted that his plan to give federally owned, city-controlled land to Snyder for his stadium, moat and all, was totally in place and ready to be announced, and that “nobody cares” enough about the team’s racist name to hold up the agreement. “It’s a done deal,” Evans said.

But reports showing Evans to be a serial ethics violator started coming just weeks after his stadium boasts, and his deal with Snyder was never done.

And with Evans crippled clout-wise, Snyder has been shopping outside D.C. On Jan. 22, days after Evans resigned, the Washington Post reported Snyder tried to shake down Maryland lawmakers for a state gambling license, with one lawmaker in Annapolis saying the owner made a “veiled threat” to take his team to Virginia—but not D.C.—if he doesn’t get his way. If Evans’s grifting ways in fact result in keeping the wildly unpopular owner out of town, citizens might agree it was all worth the shame he brought the city.

Disclosures: One of the author’s sons goes to Hardy Middle School, the public school most negatively impacted by the deal with Maret. Also, Jack Evans once called him to berate him for writing that Nationals Park was being built with public funds; the dumbass argument Evans made repeatedly during his phone tirade was that all the money used to build the stadium, a tab that eventually hit about $1 billion, would come from new taxes implemented specifically for that project, and therefore those tax revenues couldn’t be called “public money.”