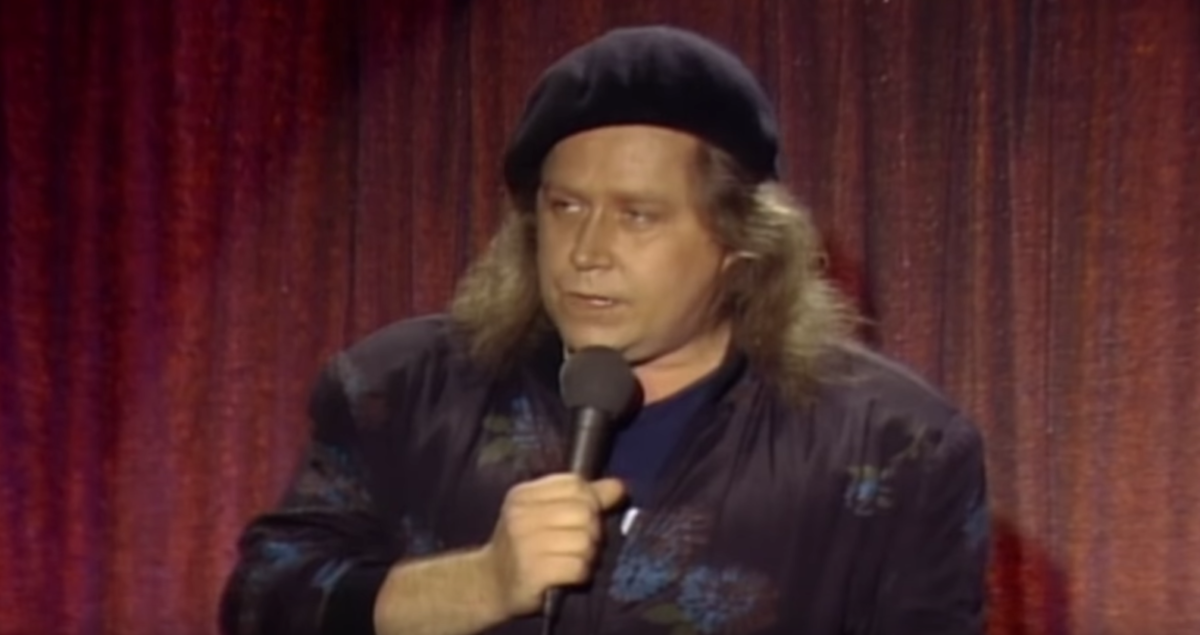 Recovered Memory: That Time Sam Kinison Annihilated Me And My Mom

For more than three decades, my friends have giggled at me while recounting the time they saw me get destroyed by Sam Kinison for being an idiot heckler. I’ve retold the tale myself to pretty much everybody I’ve ever met. Now, after all these years, I’ve finally found it on tape.

My brush with Kinison, a former Pentecostal preacher turned first-wave shock comic superstar, came one night in early 1986, when he was the most talked-about stand-up act in the land. I was an intern at Washington City Paper, a D.C. alt-weekly. I’d spent that afternoon at the home of Catherine Filene Shouse, a socialite who’d donated her family’s farm in Northern Virginia to the federal government which turned it into Wolf Trap National Park for the Performing Arts. Shouse opened her Georgetown manse to the local media once a year to announce Wolf Trap’s summer concert schedule. This was the first press shindig I’d ever gone to. I don’t remember much about the affair other than the home had an elevator and lots of liquor, and that while pouring my own tall glasses of straight, free vodka I felt good about this journalism field I’d just entered.

I left Shouse’s house soused and stumbled my way to the Bayou, a Georgetown nightspot and the top rock club in the city, to join a group of friends from high school to see Kinison. We’d all watched his network TV debut on David Letterman a few months earlier, and had been mimicking his shriek, which the New York Times called “a grotesque animalist howl that might be described as the primal scream of the married man,” and repeating his cruel riffs about curing world hunger to each other since the viewing. (Kinison’s first big jokes revolved around bashing humanitarians for sending food to the hungry; like almost all of his material, the bit hasn’t aged well, but shock humor was novel and the rage.)

And, as told to me by my pals from that night forward, at some point in the Bayou show I shouted something incoherent at Kinison from my balcony seat right above him, and he shut me down with a long and shrieked riff built around him having his way with my mother that had the crowd in stitches at my expense.

Kinison was hated by the critics; the Times had nutshelled his act as “humor born out of fatigue and disappointment. The collective feelings that it reassuringly addresses are a sense of mediocrity and meanness of life.” But mean was right for the times in Reagan’s America. Andrew “Dice” Clay got huge relying on little more than attacks on women and gays. Dennis Miller was seen as a nice, smart comic at the time, even though most of his act was making fun of anybody who didn’t have a job as good as his during the “trickle-down economics” era when lots of Americans couldn’t get any work. Kinison, for all his inhumanity, would go on to play arenas and do movies, and even made the cover of Rolling Stone when it mattered.

So my story about that night at the Bayou had legs in our crowd, even beyond Kinison’s 1992 death in a car crash in the California desert on his way to a sold-out show in Nevada.

A couple years ago, when I started doing a “story time” video series at a former workplace, I figured why not retell the Kinison bit. And I briefly searched for recorded evidence of that night. But I never had any luck getting through to anybody at Kinison’s official website. And bootleg tapes of his early shows were remarkably scarce, given his renown back in the day. I thought I’d hit paydirt when some folks behind a 2013 documentary of the Bayou, “DC’s Killer Joint,” told me they’d seen a reel-to-reel recording of Kinison’s 1986 appearance in Georgetown while making the movie. But after a trip to the Manassas warehouse where it and thousands of other artifacts from the club were last known to be stored, I got word from the filmmaker that the odds of ever finding the tape of my dreams were of the needle-in-a-haystack variety.

So I was resigned to merely retelling the tale of how my brief career as a heckler ended. And a few weeks ago, I was telling that very same story yet again to my friend Tom, complete with the awful things Kinison said about my mom.

He couldn’t place where or when, but he said there was a time when he found Kinison funny and that he’d heard a recording of the episode I’d described. So it really was out there somewhere!

And the next day, Tom sent a YouTube link for a 46-second audio-only recording of Kinison absolutely destroying a guy who interrupts his act. (WARNING: This is as NSFW as a non-video YouTube post can get.)

Kinison: “Yeah, that’s what your mom told me when i was leaving her house! [Audience screams.] But I couldn’t hear her so well! I tried to understand her, you know, but she had my sperm gurgling in her throat! She was saying, [breaks into gurgling voice] ‘Saaaaaam! Saaaaaaaaam! When you’re doing the show be sure to speak up! And tell my retarded son not to fuck with your act!’ You may not recognize her when you get home, I shaved her back!…. [Audience and Sam scream louder.] Still want to help out, huuhhhhhhhh!?!?!??”

Good god! A voice from the past! Mine!

I did some digging and found that the YouTube snippet was from a 1986 Kinison live album, Louder Than Hell. The credits say the LP was partially recorded at…The Bayou. I called up Mark Linett, the decorated music industry veteran (Brian Wilson, the Beach Boys) who engineered the record for Warner Brothers. Linett told me the tracks on the album weren’t separated or identified by the venue they came from, but that from memory Kinison didn’t repeat that sperm-gurgling mother line of attack at different shows during the ‘86 tour. “If he said that stuff, I’d say that’s you,” Linett said.

I’m still close to the guys I went to the Kinison show with, and sent the link. Yeah, I’m the blotto punching bag.

By the way, I quit drinking in 1987, and never went back. But like all former drinkers, I still tell everybody my drunk tales, including the one about my destruction at Kinison’s hands. Well, almost everybody. I never told my mom.

Everything You Need To Know About Sunday’s Big Game

Here Is Our Sponsor Dashlane’s Big Game Commercial, Which Is Being Posted Here As Sponsored Content